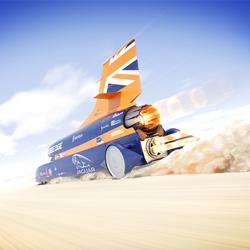 The Bloodhound supersonic car project had been on hold due to limited funding, but has received new sponsorship deals and so the team are now looking to break the land speed record in October 2017.

October 2017 will be the perfect date as it marks the 20th anniversary of the setting of the current land speed record by Thrust SSC, where it achieved a speed of 763 mph on the Nevada Black Rock Desert salt flats in the US.

The Bloodhound SSC (supersonic car) is aiming to raise the land speed record to 800 mph in 2017, in South Africa.

That's not the end of ambitions for the car however, with an attempt to go over 1,000 mph planned for 2018, provided development and testing goes well.

Engineers who were let go have now been brought back, and remaining components ordered to allow the build to be completed.

The jet engine from a Eurofighter Typhoon is to be used to get Bloodhound moving and up to several hundred miles per hour, but an additional booster rocket will be needed to push on through the sound barrier and on to 800 mph and beyond.

The rocket is coming from Norwegian company Nammo, but it will use a gearbox designed by the Bloodhound team and a pump driven by a Jaguar V8.

Chief Engineer Mark Chapman said: "We're talking now about being in South Africa in August/September 2017. This would give us a few weeks of running to shake the car down, increase the speed and then go for the record around October.

"The date would be quite poignant because it would be exactly 20 years since Thrust SSC."